I was originally planning to write about some the other ideas which came to mind whilst researching my end of term project. However along the way I changed my mind and switched the title to one of my alternative ideas, so instead I'm using this space to write about why I switched and the progress I had made.

My original idea was look at human-computer communication with specific reference to the use of robots (chatbots) to influence humans and how humans can be programmed and ideas spread in a viral-like way. I wanted to focus my research by looking at Twitter and the use of chatbots to influence and program people and was interested in the term psychosis, however during my tutorial it became clear that it's a complex, and loaded term and would probably not be appropriate to consider within this use. The focus shifted to look more specifically at how ideas spread in humans, and how the Twitter milieu enables and positions chatbots relative to humans.

My interest was sparked by the large amounts of speculation of the use of robotic agents to influence and subvert people's minds with relation to the UK's European Referendum (Brexit) and the United State's Presidential Elections 2016. I also have a long standing background interest in fictional speculation around computerised cognitive control. A long time ago I read Snow Crash (Stephenson 1992) which revolves around the idea of a special code, a virus which when read by humans within cyberspace kills its victim in real life.

I talked about my ideas with my classmates and they proffered lots of useful books and articles. I read Manufacturing Consent: The Political Economy of the Mass Media (Edward S and Chomsky - annotated bibliography below). Then the tragic events of the Christchurch mosque shootings in New Zealand which was live-streamed on Facebook occurred. It was a shocking event and though it isn't directly related to my research it just felt too close, and I don’t feel like I’m qualified to talk about it. The relations between social media and mental health are very complicated and I just no long felt I could focus or approaching researching or writing about this topic, especially relating to the use of chatbots to influence people's minds.

Along the way I picked other ideas which I perhaps feel bad in that they are lighter and easier to address.

Time present and time past
Are both perhaps present in time future,
And time future contained in time past.
If all time is eternally present
All time is unredeemable.
What might have been is an abstraction
Remaining a perpetual possibility
Only in a world of speculation.
What might have been and what has been
Point to one end, which is always present.
Footfalls echo in the memory
Down the passage which we did not take
Towards the door we never opened
— Burnt Norton, T.S. Eliot

Florian looks at a wide variety of computer related communication, both as text and code. They highlight and contrast the practical forms relating to the computer and the human cognitive and socials aspects. I was draw to this as it looks in to the differences and similarities of the human and computer when it comes to textual communication, the cultural aspects of code and the ideas of executing the code and control structures.

Edward and Chomsky outline the scope and workings of mass media and then quickly address the core ways in which they see it as a tool of mass manipulation. “the media serve, and propagandize on behalf of, the powerful social interests that control and finance them”. They then enumerate the key ways in which they consider this takes place. The areas of interest to me were chapter 3 on legitimizing versus meaningless third world elections, which shows examples where elections for various regimes are praised or degraded within popular western media outlets. Chapter 1.4 deals with “Flak and the enforcers: the fourth filter”, showing where doubt can easily be cast on legitimate and factual reporting in order to reduce its impact and confuse the situation.

Ruskoff has written a chatty and concise guide based off a talk originally given at the South by Southwest conference. He looks the fundamentals of human language and how it compares with computer language, talking about the speed at which information now travels and that this creates a cybernetic organism which network and collectively thinks in more advanced ways that we do as individuals. He looks the persistent and omnipresent nature of the internet as a complete single system. Then later the role of choice within systems, if you can't program then you have reduced agency to create your own choices and are stuck with those who have created the systems you end up using. 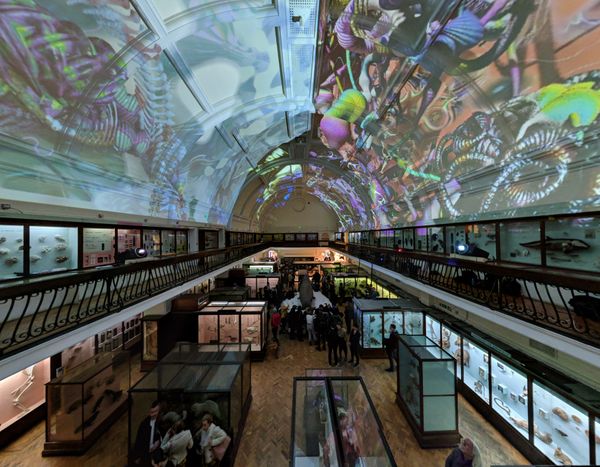 This week we looked at speculative practises, ideas around thinking into the future and imaging other pasts and futures, writing practise as time travel. One of the ideas which caught

On Thursday I took part in a late night exhibition at the Horniman Museum in south London. I worked with classmates from the course Christina Karpodini, Hazel Ryan and Romain