This week we looked at topological methods, and also discussed some of the ideas around digital witnessing from last week.

We had read Digital Narratives and Witnessing: The Ethics of Engaging with Places at a Distance by Nishat Awan. We were asked to form small groups and to pick a quote from the reading and discuss it. We went with the following:

One key critique has been the distant nature of such endeavours that could be seen to use technology as a proxy through which to administer aid, while keeping Western humanitarian agents safe and out of harm’s way (Duffield 2013). Another aspect relates to the actual visual material that such engagements produce, often contributing to the impression that certain places are in permanent crisis.

The group discussion was very lively and we talked a lot about some historial ideas around digital witnessing. We talked about the use of the IBM computers and the Holocaust, and going back to earlier technology the telegraph/semaphore line used to warn of ships and spread information faster than a horse could travel.

We looked at a photo of attendees at a World Economic Forum where attendees were wearing VR googles to experience the plight of a Syrian child refugee in a piece called Clouds over Sidra (edit see below for my reaction to the work). It made us think about the distance and whether such an idea brings you closer mentally to the space of the refugee, or whether it could harden your mind against the person. People often have strange reactions against stressful situations and blame others over themselves. Initially perhaps it creates empathy but we get “tired” of and it end up ignoring. We thought about the indifference of the growing numbers of rough sleepers big cities and infrastructure created to normalise it (see work of Krzysztof Wodiczko discussed later).

I was reminded of the photo of US President Barack Obama in situation room photo (2011) digital witnessing the remote killing of Osama Bin Laden. Computation enables the live view.

I also though about the Guardian's 6 x 9 VR piece, which puts you in a typical US prison cell and explains the circumstances that someone in that condition can expect to face. It's a horrid experience, and unlike most use of VR in that it is almost entirely static, just you sat on the bed in this tiny room. The sounds become very intense and it certainly gave me a strong feeling of confinement and despair.

The next logical step with VR in someways comes the from film eXistenZ by David Cronenberg where the VR experience is so real there is no way to tell when it has stopped (or when it began). I often hear the argument against VR is that it's low fidelity and we just need slight better equipment, but I don't think this is the case at all, since gaming was very popular back on the ZX Spectrum which was very low fidelity. We need better understanding and creative uses of the medium. If we achieve VR like we see in eXistenZ then it will be the end of reality.

Edit March 29th 2019:
I bought a Google Daydream headset so that I can do basic VR stuff using my phone. I watched Clouds over Sidra. It's really a powerful piece. It has a very neutral tone and shows 360° video from a static position narrated by a young child as the voice of Sidra, a 12 year old girl living in Za'atari camp in Jordan. The film only lasts around eight minutes, but it really did make me feel a lot more epathy and pay attention, and I was crying by the end. It's made me think again about how it effects feelings of attachment.

I went to Somerset House Studios, to see The Mother of all Demos, which was an event to mark the anniversary of the demo by internet pioneer Douglas Engelbart’s original 1968 presentation of the key elements that would shape modern computing. It was interesting to learn that a lot of parts to make the video were essentially faked, to give the impression of technology that didn't at the time really exist. I'm sure the same goes on today though still. Later we got a performance (or demo) by Atau Tanaka of his sensor driven sound piece, along with some technical insight as to how it worked. We also saw a demo of gloves which can translate sign language, another interesting Goldsmiths project. 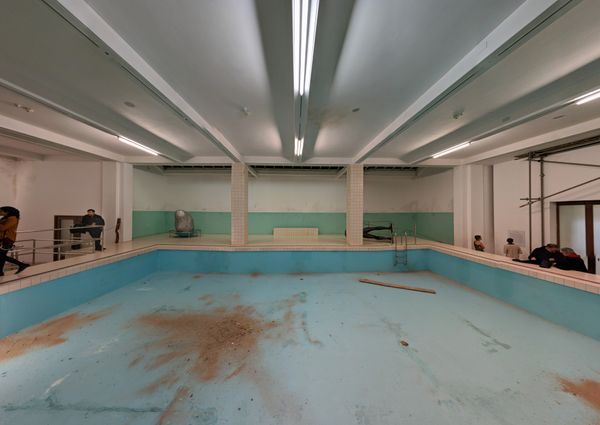 This week began the second term with an unexpected announcement that the whole class would fail the final project unless everyone got at least a pass mark. The class was

Produced by: Julian Burgess and Isabel McLellan This  project traces a path from coding today to our early computational  practices, through the lens of posthuman analysis. We are studying how