This week there were also no lectures scheduled and so I went to Paris for the Grow conference  on creative coding. All the talks were really good and it was well worth attending. The focus was mostly around works that the speakers had created, with some insight in to the techniques behind it and not much time was given to the art theory underlying their practice.

I particularly liked Mario Klingemann's talk - Instruments of Creation. He spoke about his work on using AIs and particularly generative adversarial networks (GANs) to create art. His work is very inspiring and I had seen it briefly before at the Lumen Prize awards. He also answered a question from the floor at the end of the talk about the recent controversial auction of a painting at Christie’s which was claimed to be the “first painting by an AI” created by French trio Obvious. He was very diplomatic about the situation but noted that work by Robbie Barrett on creating and training the AI which was used should have been credited and that it seemed poor research on the part of the auction house not to have more notes on the provenance of the work.

While in Paris I also visited Atelier Lumieres which is a very large space dedicated to projection mapping. It is set in a former factory and has two rooms. The smaller studio room was showing Colours x Colours (featured above) which was an amazing piece for the space, it shows slow motion dissolving paint and inks. It's works really well in the immersive surrounding space that the room provides.

In the main room they had a piece showing re-imaginings of works by Gustav Klimt which I didn't really like so much, as it felt like a degenerate of the originals and didn't work naturally with the space. The colours were vivid, but the original works contain various precious metals which reflect within the piece and give it a depth which doesn't translate to projection.

They also showed Poetic_AI which I enjoyed a lot more. It was quite reminiscent of some of the works by Ryoji Ikeda.

I visited the Paris catacombs, which I've wanted to see for a quite a while. It's a really strange experience, the path through the catacombs is quite narrow and somewhat claustrophobia inducing. When you reach the first room of the bones, it feels, I don't really know how to describe, there was a lot going on for me, it's certainly creepy in some ways, but almost calm and serene in others. The catacombs run all over Paris and you only explore a small part, but the bones of several hundred-thousand Parisians are down there, Paris is literally built on top of them.

I've been thinking a lot about the idea of embodiment after Atau's lecture in the third week. One piece from a long time ago which cam to mind was a device made by Mike of  White Lightning which I saw at DorkBot in around 2009. The device was a small wooden box which contained a matrix of WGRB LEDs which showed a zoomed in photo which had been uploaded to the box. In many technical ways it wasn't so different from the iPad which had been recently launched, but I now realise that embodiment is the term I needed to describe the material differences of the feel of the box and how that changes the way in which we interacted with it relative to a commodity device such as an iPad. 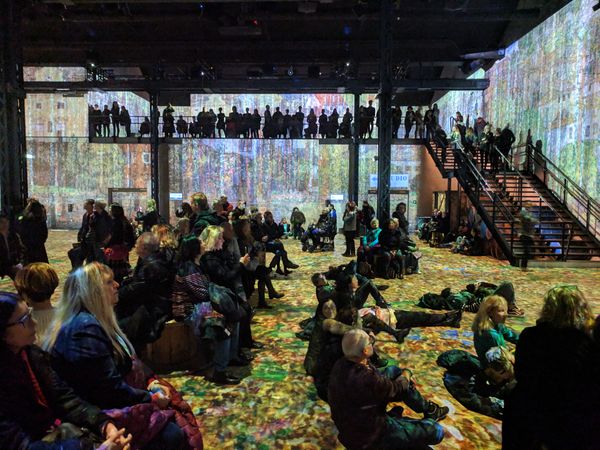 This week the lecture focused on using Material Semiotics, as a tool for describing things in relationship to other things. Using it anything can be seen as a product of

This was reading week so we had no lectures scheduled. VisitsI visited the Creative Machine 2 exhibition at Goldsmiths. It was titled An exhibition exploring the twilight world between human