FaceTime  is an interactive timepiece which incorporates the viewer's face into  the time display. It is built using OpenFrameworks with face tracking  video processing.

FaceTime  has two scenes, the first shows a black screen with the current time as  a series of straight lines connected to a bright red mouth shape. The  mouth tracks that of the viewer and when they open their mouth very wide  it makes the lines thicker and brighter. Scene two tracks the face of  the viewer and crops an image around their face and redraws this on the  screen multiple times with a delay and also behind each numeral of the  clock display.

The work of Zach Liberman inspired me greatly. He has done a fantastic amount of work around face  tracking, where the viewer's face or parts of it are remixed and  altered in real time. Recently some of them have been added to Instagram  as filters which are now very popular. I am also really interested in  time as a concept and how we relate to it and timepieces which show the  passing of time as an integral part of the artwork. I wanted this work  to incorporate those ideas. The focus of my idea was that as a person  viewed the timepiece, they become integrated with it. Ideally, the  duration spent looking at the work would be reflected by back in the  amount of time their face continues to appear in the work after they  have left.

This project was built using OpenFrameworks. I initially used the ofxFaceTracker addon, but switched to ofxFaceTracker2 as I found it had better performance, also it had the ability to  recognise more than one face at a time, but I didn't get around to using  this feature in the end, and also found that it had a severe  performance impact when trying it out. I also added CLAHE to improve contrast in the image before applying face detection. I learned about CLAHE from this helpful blog post by Zach Lieberman on a project he had implemented which uses face tracking. Adjusting  contrast is especially important if I want to install the work in an  area which has natural lighting since the contrast of the faces can be  extremely variable depending on lighting conditions.I  extensively used the ofxDatGui addon for dynamically controlling  variables within the code. It was really helpful as compile is quite  long and so this makes tuning and experimenting with variables much  simpler. It also has folders which I used by passing a reference to each  scene on startup, this made it so much easier to work on a single scene  or part of the code.I found writing the  code quite challenging as I'm not very familiar with C++ and the  differences relative to JavaScript, which I use a lot more. I spent a  lot of time getting the numerals of the clock to align so that they  didn't jump around as the "1" numeral is thinner than the "8". In the  end, I made equal-sized blocks, in which each numeral would be centred  and then had an adjustable width for the block that contains the colon  (pictured below). It was a huge amount of coding work for something  which looks very simple, so perhaps I missed a trick, or there is a good  library which could have done most of this for me.I  also had problems with the text in the mouth clock scene. There I was  basing my code on the OrganicText example we developed in Term 1. The  trouble was that the code for creating points measures the rendered  width of a glyph, so again an "8" is wider than a "1", and then I wanted  to render the same text again over the top. In the end, I stored the  width of the "8" during the setup code and then reused it. However, it  still needed a little offset to adjust depending on screen size. I used a  Logitech external webcam as I found it had better resolution and  contrast than the build in iMac webcam.

There's  a lot more development I could add to this work. I started on the  ability to switch scenes, but only had time to implement two scenes.  Ideally, I would add many more scenes, also adding more dynamic  variability within the scenes. I'd also like to look at changing the  parameters of the scene more with the time so that it reflects ideas  around when the person is viewing the piece. So at night, it would show a  different style of interaction compared to daytime, but also perhaps it  has a different style in winter compared to summer.

Overall  I was pleased with the work. At the exhibition, it was really enjoyable  to watch people interacting with the work without knowing that I was  the author and to see how they understood and worked with the piece. It  seemed the mouth clock scene was more popular than the webcam delay, so I  left it mostly playing that scene. People understood the mode of  interaction quickly, but the face tracking itself wasn't that reliable.  There's another library OpenFace which I think might be more reliable, but it wasn't clear how easily I  could use it with my existing OpenFrameworks code, so I didn't try to  use it.My code was quite well structured,  but I'm still struggling with understanding how to pass references  around in C++, so it limited some of the modularity of the code, and  also made it harder to reused code between scenes. 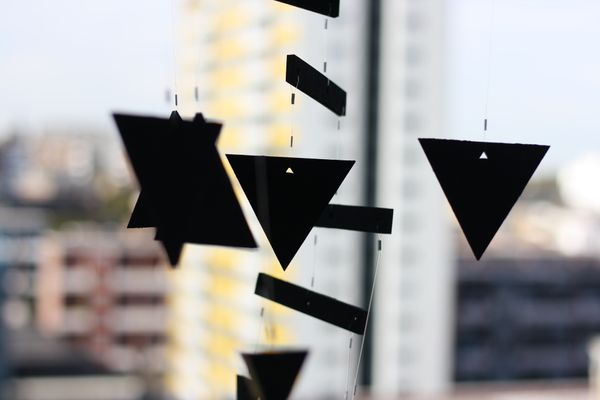 Genetic Construction is a mobile created using genetic and linear algorithmic processes. It draws on ideas from the centennial constructivist movement looking at art grounded in the material reality of space and time. 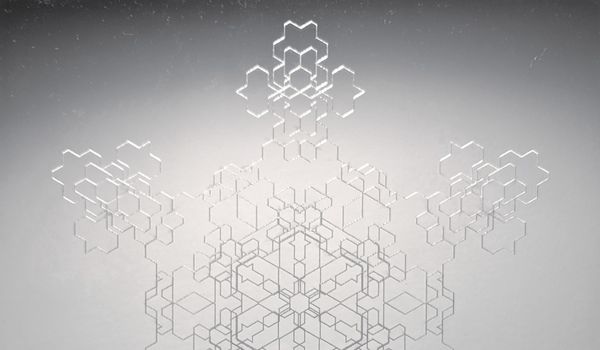