Genetic Construction is a mobile created using genetic and linear algorithmic processes. Taking inspiration from the works of Munari and Calder, it also draws on ideas from the centennial constructivist  movement looking at art grounded in the material reality of space and time.

The  work comprises three types of element: the equilateral triangular  masses, the pivotal beams and the thin transparent connecting  monofilament threads. The elements are represented by a tree structure  within the code, where calculations determine the position of the pivot  point along the beam to ensure the tree-like structure will balance. A  population of random variations is generated and fed into a genetic  algorithm which selects the fittest individuals to proceed to the next  generation. It seeks to reduce any clash or entanglement of the  components whilst also looking to optimise the diversity of masses and  complexity of structure.

After many generations of genetic  selection, I picked an individual from the population and used the  generated blueprint to laser cut the pieces and assemble the mobile  structure. It is painted with blackest black BLK 3.0 paint, as I wanted  the piece to be invisible, for it to create a subtractive, negative  space where its presence is that of what is removed from view — like  floating voids in space.

As a  part-time student I have the luxury of having two summer term projects.  This year I knew in advance that I wouldn't be able to attend the end of  year art show as I would be going to Ars Electronica.  Therefore I wanted to create a project that I could be certain would be  ready before I left and that would work seamlessly at the show in my  absence.

I had seen the Alexander Calder: Performing Sculpture show at Tate Modern in 2015 and loved it. I've been fascinated by  kinetic art since I was a child and have admired the works of Bruno  Monari, Alexander Calder, and other kinetic artworks. It had been a  long-standing ambition to create mobiles and this seemed like the ideal  opportunity to begin my explorations.

My work on this project was  broadly split across two parts: writing software to generate the layout  for a mobile and physical construction of the mobile. Both presented  challenges which I didn't expect.

I  initially thought that creating an algorithm to balance a beam would be  easy since it should simply be applying the above Newtonian law we were  taught during GCSE physics. However, it was more complex than I that,  as usually these physics exercises assume a perfect straight massless  beam, and in real life the mass of the beam matters!

I  researched  balanced construction techniques and discovered the Whippletree, which is used to tether horses (and in other situations) to  spread the forces evenly.

I experimented by  iteratively experimenting with balancing structures made materials from  around the home. I was somewhat surprised by how delicate it was to  find the pivot point.

While performing these  physical experiments, I also began trying to work out how to draw a  mobile. I thought I might be able to use L-Systems again as I had used  them before in my theory project for drawing snowflake shapes. However,  it wasn't easily possible since the recursive nature of L-systems made  calculating the balance point complex. Instead, I decided to use a tree  structure with the assistance of D3 Hierarchy.

I  decided to create my project using JavaScript since it is the language  with which I am most familiar and I wasn't expecting any significant  performance issues. Also, JavaScript and the web as a platform has  advanced considerably in the last few years which has made writing more  complex projects much easier.

I made some fairly basic SVGs of mobiles using D3 and decided to try out  laser cutting them at the Hatchlab. It was not a success at all! I  hadn't yet accounted for the mass of the beam in my code, plus there  were scaling issues which mean it was far off balance. As I work full  time getting access to the laser cutter was tricky so I had to do a lot  of measuring and experimenting at home in the evenings. Towards the end  of the project, I started using the laser cutter at the London Hackspace  as I could get late-night access and there was no queue of fellow  students.

With some maths advice from my girlfriend, I  figured out how to account for the mass of the beam in the equation and  the images which the code produced started to at least look like they  should balance.

I decided to split my code  up into modules and used Svelte to assist with this. It became much  easier for me to then separate the code in the model which was  controlling the dimensions of the tree from the code which rendered the  tree to the screen. I was then also able to add another render which was  optimised for cutting the mobile from sheets of acrylic.

I  now had some output which looked promising so I started to add  variability to the generation of mobiles. I used dat.GUI to make a basic  editor for playing around with variables. In the end, I settled on the  following variables:

I then got quite stuck on creating the genetic algorithm. I wanted the  tree to be of variable depth and so the number of beams and nodes would  need to vary, and I wanted to apply further variations to each beam and  node. I chatted to Andy Lomas about this problem, as all the examples I  have seen had a fixed length DNA and he advised me to stick with that  principle otherwise breeding and mutating the DNA would become complex. I  was using a lot of random function calls within my code which meant  each time I ran it I got a completely different tree, so there was  nothing to evolve from or towards.

I had a small improvement when I switched my  random function to be seeded so that I could pick a given seed and then  adjust the amount that the DNA applied to the phenotype of the mobile.  However, this was still far from ideal as the same seed always produced  the same tree, so the genetic algorithm could only seek to find the best  parameters for that tree. There was no way of merging two seeds  together without ending up with a completely different tree which was  nothing like either of the two parents. I struggled with this idea for  ages and then eventually realised I could use random noise! I changed my  code so that the seed now just generated the noise and then all the  randomness came from the position on the noise. Now when two DNAs were  merged they could become closer to each other on the continuous varying  noise function. Sometimes this still meant wild changes, but it could  allow them to settle and find local maxima.

Now  that I had my genetic algorithm working, I set about tuning my fitness  function. Initially, I had just been using a simple function to get the  total mass of the mobile to target a given number. An early and  important idea was to use it to remove or reduce the chance of parts of  the mobile clashing or bumping into each other. I thought about how to  achieve this and came up with the plan to render the mobile to an HTML  Canvas with 50% transparency and then count the number of pixels which  had opacity above 50% and normalised by the total area of the mobile.  The fitness would target reducing this overlap area to zero.

This  plan worked out pretty well. The above animation shows some of the  results. I made the vertical drops much thicker than they would be in  the physical version so that the algorithm would "try harder" to remove  this overlap too. It worked pretty well but tended towards finding very  simple small mobiles, so I added to the fitness to prefer more nodes and  a larger diversity of sizes which increases the complexity and  interest.

I  plan to continue developing this work as I've found it really exciting  and had lots of positive feedback about it so far. The natural  progressions I would like to make are to extend the range of shapes for  the masses, initially to cover other regular geometric shapes, but then  ideally any shape including calculating the negative mass of holes. I  would also change my code to deal directly with mass instead of the area  so that I could incorporate other items, such as found objects into my  mobiles. I would also like to be able to extend the total size and mass  of the mobiles - this will require a lot more research into the  materials since my prototypes were already reached the limits which  caused the beam to bend.I would also like  to develop a clearer narrative behind mobiles produced from this work so  that I could use the concept of balance to compare and contrast ideas  and representations as part of the manifest form of the mobile.

Overall  I was very pleased with the outcome and amount achieved with this  project. Every step was more complex and took longer than I had hoped  for, but I eventually got to where I wanted. I would have liked to have  made a bigger mobile, but I found I was closer to the constraints of the  materials which caused the beams to begin to bend.

Thanks to Brittany Harris for helping me with maths, code reviews and general help and patience with this project 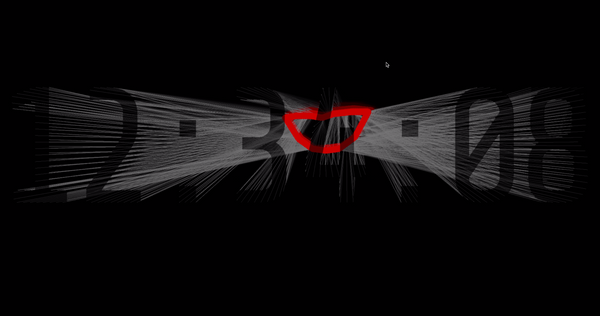 FaceTime is an interactive timepiece which incorporates the viewer's face into the time display. It is built using OpenFrameworks with face tracking video processing.