This week we looking at the ideas around touch. I read chapter five of Matters of Care - Speculative Ethics in More Than Human Worlds by María Puig de la Bellacasa, and the introduction to Archaeologies of Touch Interfacing with Haptics from Electricity to Computing by David Parisi.

The care that touches me today and sustains me might never be given back (by me or others) to those who generated it, who might not even need or want my care. In turn, the care I will give will touch beings who never will give me (back) this care.

This quote from María really struck and made think how that we (humans) are all touched, at a minimum by virtue of being born and all these touches pass through generations connecting us across time back to our very earliest ancestors. I then thought about  the idea of a child completely untouched, conceived in a test tube, and decanted from a bottle like as in Brave New World.

As haptics improve, will we lose trust in our sense of touch, what would be René Magritte’s "treachery of images" be like in touch form?

“ensoniment,” defined as “a series of conjunctures among ideas, institutions, and practices” that “rendered the world audible in new ways and valorized new constructs of hearing and listening.”

I was really pleased to find this quote as the trope of jacking in to cyberspace is so common and although we often tend to think of vision as the primary sense, actually touch is as fundamental in many ways since it's the mechanism for interaction within these virtual worlds.

Achieving this end of a seamless and one-to-one link between the haptic system of the user and their virtual or remote avatar appeared readily at hand in science fiction novels and Hollywood films: tactile variants on cinema (as in Huxley’s Feelies and Salvador Dali’s Le cinéma tac- tile), the notion of jacking into a cyberspace that provided even more data for touch than it did for vision and audition (a common feature in cyberpunk fiction like William Gibson’s Neuromancer, Neal Stephenson’s Snow Crash, The Matrix trilogy, and eXistenz), accessing virtual reality through some more messy physical inter- face (as in The Lawnmower Man and Ernst Cline’s novel Ready Player One), or the establishment of a stable connection between the self and a remote body (Robert Heinlein’s Starship Troopers novel; the films Avatar and Surrogates). And although the ease of this feat on page and screen belies its near impossibility in the design lab, the promise of haptic interfacing retains its power.

Is knowledge-as-touch less susceptible to be masked behind a “nowhere”? We can see without being seen, but can we touch without being touched?
— Touching Visions by Maria Puig de La Bellacasa

We talked about this a lot in class, can touch ever be an uni-direction event? Certainly only one party might be aware of the touch, perhaps they didn't notice it or even aren't sentient. We took this quite far, thinking about whether sound waves count as touch? what about light particles and then from that what does touching really mean at the sub-atomic level, where we are really thinking about how electrons and the weak electrical force are behaving.

Even when we are not intentionally touching something, the absence of physical contact can be felt as a manifestation of touch (Radcliffe 2008, 303)

This two quotes amused me, as it was interesting to see the Pope quoted and in relation to the financial crises. I spent a lot of time thinking about money and wealth (both personally and related to work), and it always fascinates me the sincerity it's given, especially relative to other forms (ideas) of currency which are dismissed as toys, although often you find that economists actually have a very wide and are much more accepting than people more related to profits. I think studying economics would be something I'd love to do one day in the future, perhaps another Masters?

In declarations following the explosion of the financial speculative bubble leading to the 2008 financial crisis, Benedict XVI, the catholic pope in office at the time, encouraged people to hold on to beliefs that are not based on material things. He warned that those who think that “concrete things we can touch are the surest reality” are deceiving themselves.

It struck me how, months later, its offices still exhibited posters of a campaign inviting clients to give up “paper titles” in favor of digitalized ones with the slogan: Dematerialisation. Inform yourself here.5 Pope Benedict XVI was clearly out of touch with what critics of the imploded financial system had been relentlessly highlighting: the immaterial and unreal character of a speculative bubble frantically inflated by global markets disconnected from the finite material resources of people and this planet. Dematerialized, financialized wealth.

I was reminded of a piece by Ruiyang Ma that I saw at CSM show the year before last. He was born with an extra digit and faced discrimination from it growing up, and wanted to research how polydactyly is considered within society.

In small groups we were given a few mins to think of terms and ideas relating to touch. It was pretty amazing that as we went around the class almost all the ideas were unique and the list just grew and grew.

I thought about the idea of forbidden touch and remembered an event which occurred to me a few years ago. I was going up the long escalators Holborn station, the central escalator was being repairs and so had hoarding enclosing it. As I approached the top of the escalator I saw someone had climbed up on the side of the escalator and I initially thought they were just being stupid but as I got nearer to the top I saw that the station lobby was packed with people and there was no space to get off the escalator and people were piling in to each other. I too jumped up on the edge of the escalator and thumped the emergency stop button. Everything turned out ok but it was a high adrenaline moment. I was always fascinated by the emergency stop button on the Tube since being a child, as it's very brightly coloured and also carries a big warning sign that “improper use” carries a heft fine (currently £200 I believe) and so as I child I was always scared that I might somehow accidentally press it and lose a great deal of pocket money! It was strange to have been in a situation where I did need to press it, I felt like something which I never expected to occur in my life, and some how that touching even took on more significance.

Below are the notes of the ideas we came up with during the exercise:

This is a re-blog of my Term 1 project for Creative Computing. roto escalation is a projection mapping artwork built using a triple layered  circular geometry canvas. It has five 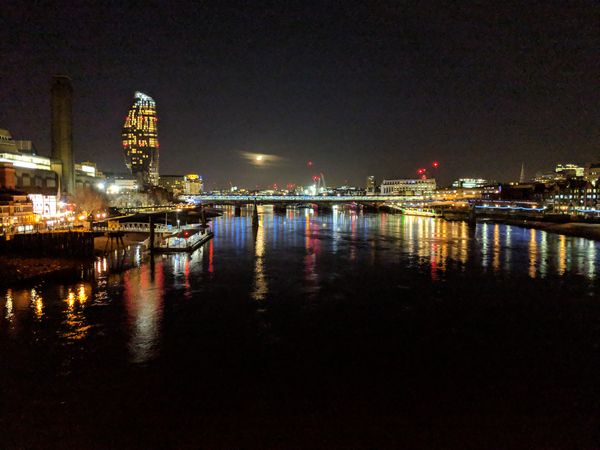 This week we had a guest lecture from Dr Sarah Wiseman. She talked about her research paper titled Repurposing emoji for personalised communication: Why  🍕means “I love you”. She talked