This week's lecture was title “What is it like to be a thing?” and drew from Alien Phenomenology, or What It’s Like to Be a Thing — Ian Bogost and Vibrant Matter — Jane Bennett.

I found the lecture really interesting and I felt like I understood it much better than the early lectures in term one. We looked at using the idea as tool, to think and write about from the perspective from the “thing” and to avoid human exceptionalism and try and move past what it might be to think as a human.

If a lion could speak, we could not understand him
— Wittgenstein

This quote came to my mind and when I asked Helen (our tutor) about, she explained that we can challenge idea and use the framework as a tool to imagine the experience of being the thing, not necessarily trying to communicate as the thing or to understand it, but to just move outside ourselves, which made sense to me.

It felt like a lot of the items often had human connections, found items of street trash (rubbish) on the small and familiar scale, to the more exotic ideas of the flotsam and jetsam of space junk. In nature we thought about the vastness in scale and energy of volcanoes and the long temporality of the shifting of tectonic plates.

We thought about the idea of what is it like to be a computer, which Ian Bogost writes about in his book. I like this idea very much, as a child I was always very curious about how electronics worked and I would enjoy taking apart radios and other broken electronic items and was fascinated by the spectra of electronic components which to me looked like a city casting myself as a giant overlord. It was interesting to essentially come back around to this same idea, of how a capacitor might feel, or the personality of a relay switch (somewhat bipolar perhaps?). Another world I often imagined myself in to as a child was that of a pinball table, which I think probably was largely influenced by the Sesame Street counting song. It's something I like about this course, combining the that engineers can understand how something works, but also to understand what something experiences.

I liked the poetic form that Jane Bennett employed listing the items with rich description. I'm currently evaluating idea for my research project and thought this might be an interesting form to take as part of the write up. I also started think about the idea of trying understand the experience of an algorithm. I've been looking at Twitter's Snowflake algorithm and so started to ponder how it might feel to be the algorithm. Watching a binary clock rapidly escalating, feeling that continual background pulse alongside the rise and fall of the sequential id as the human events flow through me. I found it hard to think about existing simultaneously across many different servers, all working together and yet each part separate (by design) each in a sense unaware of the other and yet systematically all one of the same.

Towards the end of the lecture we watched a video of a talk by Katherine Behar, where she briefly touched across a wide range of her works. What particularly caught my attention was when she mentioned about weights. She had an image of a Mesopotamian duck weight and it took me a while to recall where I had seen it before, I thought perhaps we had covered in it some way in class, but it was actually from the research trip I did with Izzy to the British Museum for the group project which focused on Quipu. The curation of the gallery meant that ancient artefacts relating to literature, monetary account and measurements of weights were all close to each other. Recordings and representations of the immediate world around form a lot of the focus of early human artefacts (along with wildly imaginative and decorative objects). The duck weights caught my eye as most of the other forms in the section appear very functional, yet these have an amazing aesthetic. Now viewing them again it made me think further, about their role and purpose as units of measure and how their experience changes when they are no longer deemed suitable for that purpose as she found with broken and modified weights, this could be within the lifetime of the original creator of the artefact. Today we store most information in a binary representation, often now in the “cloud” which both by name and nature is very nebulous and hard much hard to reason and imagine being when compared with a duck.

This week's lecture reminded me of a Symposium I went to late last year — The Shape of a Circle in the Mind of a Fish. I didn't attend the whole thing and only saw a few talks. I really enjoyed the talk below from (my friend) Leah Kelly on TTX in puffer fish, and how in a very real sense we (humans) are all connected to other life in a very deep and complex way.

Earlier last week I went to my first “crit”. It's an interesting word which holds power, and has been banded around a lot by students on the course in the last few weeks, demanding we want or need them, and questions about how, when and where they would take place. I remember in one of my first jobs when I was sitting my manager and she picked up the phone and said “hello, yes, I'm busy in a meeting”, it was then that I realised that the word meeting which had this special power was similar, in that it’s actually something quite ordinary once you try it. The crit seemed to go very well, lots of interesting feedback and I hope I contributed to that. I now look forward to receiving my own crits in the summer term. 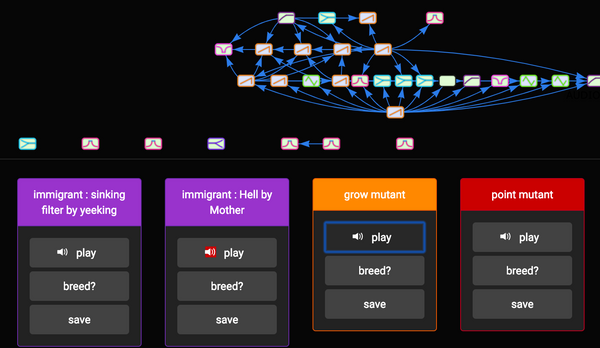 We had a guest lecture today from Matthew Yee-King. It was really cool to hear about his background across biology, music and technology and how he had tied it all

This week we looked computational art and post-phenomenology. To be honest although I'd heard of the word phenomenology I didn't really know what it meant, so had to look that