This week we read the draft blog post Algorithm by Tarleton Gillespie. In groups in class, we talked about how the use of the word algorithm has changed. The majority of the class would commonly use algorithm in the second form of the essay, to mean the entirety of the process, or even how an entire company works (the “Facebook algorithm”). This was a bit surprise to me, but interesting, and I should probably adjust my expectations around the usage of the word outside of a strict computer science setting which how I have been thinking of it up to now.

We then talked through various algorithms in our group. They included a discussion around Uber and other transportation apps and systems. One person said that they had read about how a driver had modified his behaviour in order to get a high star rating as this apparently would get him ahead of other drivers at popular pick up areas such as airports. We also talked about privacy concerns with gathering and analysis of data within large internet companies and that it is tough to tell about what is really held on us and how it is and could be used. I mentioned a little bit about GDPR and the rights it gave us and about an access request I had recently made to an insurance company.

When I initially heard the task for this was to think about artistic uses and biases in an algorithm, I was in the frame of mind of thinking of an algorithm in a computer science sense (see thoughts above). So I picked the Fisher-Yates shuffle algorithm. It also interested me since shuffling is requires randomness, and I feel the word random has similarities to algorithm in Gillespie's. They have a different meaning within a computer science context and in more common parlance and have grown a lot with the rise of the importance of computing within daily life.

Shuffling is a fairly common requirement when writing software and is often used to give an unbiased order for items of equal importance to account for perceived bias in the order of lists. It is also something which seems simple and often people will write their own naïve version, but they might not be as random as they hoped.

During the week I continued to think about the algorithm and how I might use it in an artwork. I like the ideas around exposing bias and imagined perhaps creating a robot which would repeatedly shuffle playing cards, and perhaps another robot which would sort them back in to order. The idea might be arranged in a large matrix of cards, or perhaps their positions could be recorded during the sequence. I like Life and Death of an Algorithm by Troika, and imagine it could be somewhat similar in some degrees but with playing cards spread over a large floor space.

I visited Tate Modern this week to see Bridget Riley’s To a summers day 2 as it was similar to Streaks 2, which I was attempting to recreate in openFrameworks for Creative Coding. I've always adored Riley's work, it just gripped me as a child and always fascinates me whenever I get to see a piece. Knowing she is a former student of Goldsmiths also make it a bit special for me now too.

While I was there I also visited the Anni Albers exhibition on her weaving creations. It was very interesting as weaving has a very structured and algorithmic approach and indeed some of the sketches are essentially pixel art, where the pixels are just designed to be created on the loom. See my lead photo for an example of her work.

I also visited the Hayward Gallery for the Space Shifters exhibition with some other students from the course. The artwork was very interesting but not relevant to the course in an obvious way since it didn't contain computationally driven elements. 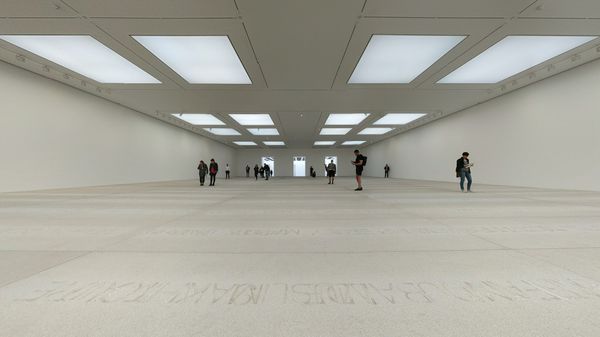 This week our lecture and seminar were covered by Professor Atau Tanaka. He talked about his background, practice and some of his works, which focus mostly around using computation in

This begins my journey on the Computational Arts-Based Research and Theory module as part of my Masters Degree at Goldsmiths. I'm much more apprehensive of this module than any others