This week our lecture and seminar were covered by Professor Atau Tanaka. He talked about his background, practice and some of his works, which focus mostly around using computation in performance art. He gave an overview of some of the ideas and thinking which has had an influence on the art world.

We heard about embodiment and the ideas of Heidegger, of objects being “ready to hand” and how thinking about them and the actions we can use them for and the form they take. We then looked at the affordance of objects and ideas from Don Norman's The Design of Everyday Things. What actions an object affords is contingent on the subject who wishes to perform it. Atau demonstrated the idea that the classroom chair affords sitting for a human, but not a cat.

We then looked at some computational artworks including SEEK, by Nicholas Negroponte (who I previously heard about through the One Laptop Per Child project). SEEK (aka Blocksworld) had gerbils in a see-through box stacked with piles of cubes which were being frequently rearranged by a robotic arm. Apparently, gerbils are very defensive of their environment and so did not like the robot and took active measures to arrange the cubes themselves and eventually disabled the robot arm by attacking it and covering it in their faeces.

Atau then showed a video of some of his sonic performance Myogram using electroconductive armbands which picked up electrical signals from his body and then were used to resonate digital instruments.

Part of our assignment was to read a couple from the journals JAR and Leonardo. I chose respectively The Rembrandt Search Party and Mother.

The JAR article I found hard to understand and relate to. It talked about Rembrandt's use of the single letter ‘R’ to sign his works and then the use of words and their construction from letters and the pictorial forms that letters they take as signs, graphemes and symbols. I found it hard to understand the relationship or reasoning for picking this aspect of his work to focus on. He later talks about blindness, the use of the words overlooked, and The Purloined Letter by Alan Poe, but again it wasn't clear to me why this was picked or how it really related to the either of the previous items.

I enjoyed the article about Mother, a 3D printed work which captures the movement of peoples hand gestures as they speak. It was a clear and fairly concise description of the initials ideas and motivations behind the project and then gave a fairly high level overview of the processes that were used in creating it.

This week I read Theory and Practice Theoretical Computer Science by Donald Knuth. I had heard of Knuth before since he is extremely well known with Computer Science, but I don't recall reading any of his works before. This piece was from a lecture he had given on the importance of working with theory and practice, together as a single form of work rather than alternating between the two, the intersection rather than a sum, as he put it. He gave several examples, such as the many diaries and papers of Gauss and how it related his measurements while studying magnetism lead to publishing maps. It was interesting to hear this as Atau mentioned similar ideas in his talk.

I also read the Design in Tech Report 2018 report by John Maeda. It was an interesting overview of the progression of technology within design and some of the most rapidly growing and evolving areas. It has a lot overlap with art practice, which is often the case when technology and society is in a state of flux. There was a nice quote which I hadn't heard before but which resonated with me.

Diversity is being invited to the party;
inclusion is being asked to dance.
– Vernā Myers, Esq.

On Sunday I visited the White Cube gallery in Bermondsey and saw Doris Salcedo's work Palimpsesto. The ground cries tears because we are unable to collectively grieve. The names appear in water and then fades back in to the ground, representing the loss and their return to the earth. It was a really powerful piece. It obviously uses computation to enable the artwork to function, but like many works of art today would we classify it as “computational art”, does the label matter?

Later that evening I went to The Glove That Fits to see some live-coding performances, including one by Hazel who is also on the MA course.

On Wednesday I went to The Library Club to see a talk by Flux with various speakers from the art tech community talking about their practice and their views on the state of technology in art and particularly in London and the UK.

On Thursday I went to Rich Mix to see talks on Playful Interfaces put on by Artful Spark. There were talks by Daniel Hirschmann, Tim Burrell-Saward, Robin Baumgarten and Phoenix Perry. The covered their practice with art and play and were really enjoyable. During the break they had demos of some of the various interfaces the had talked about. I had met Robin previously at the London Hackspace when he was working on Line Wobbler which is currently on display at the Videogames: Design/Play/Disrupt at the V&A. It was really great to get to chat with him again. To be honest, when I first met him at the hackspace, I thought he was a little mad, creating a single pixel game, but to now see, and play it, wow, it's amazing and inspiring.

This week we had a seminar in smaller groups to being thinking about our group project for the end of term 1. I partnered with Izzy Mclellan and we began 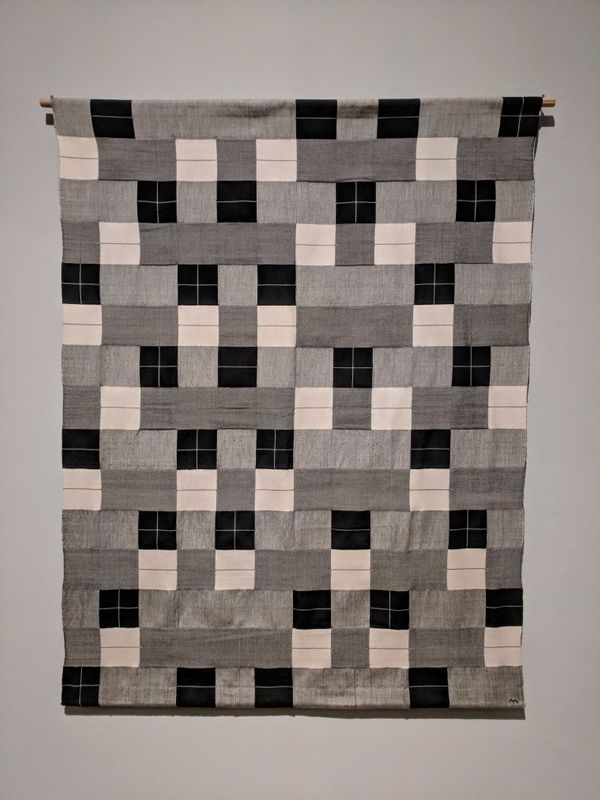 This week we read the draft blog post Algorithm by Tarleton Gillespie. In groups in class, we talked about how the use of the word algorithm has changed. The majority